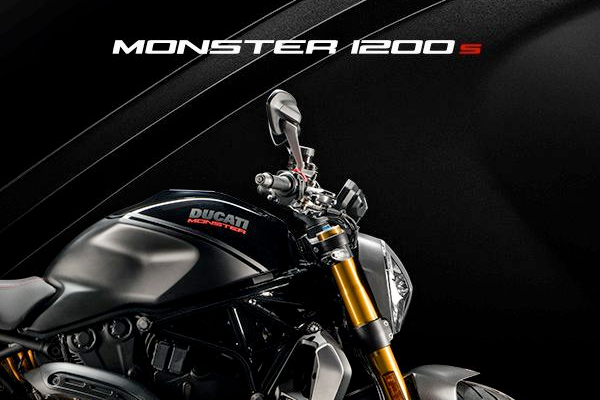 The Monster 1200 S features the new Black on Black colour which alternates details in matt black with others in glossy black, giving it even more character and sportiness.

The motorcycle is equipped with fully adjustable Öhlins suspensions, Ducati Quick Shift up/down, ABS Cornering, DTC and DWC which guarantee dynamic performance and safety. The Monster 1200 is equipped with an up-to-the-minute Testastretta 11° DS engine, capable of delivering 147 hp at 9,250 rpm and a full yet linear torque curve; that power is safely handled at all times by the Ride by Wire system and inertial platform, which provide ABS Cornering, Traction Control and Wheelie Control functions.

The exclusive S version sharpens that Monster sports performance to an even finer edge thanks to a 48 mm Öhlins fork and rear Öhlins monoshock, both fully adjustable. Awesome braking is provided by two 330 mm Brembo discs at the front working in concert with Brembo M50 monobloc calipers. The Monster 1200 S also features wheels with three Y-spokes, a carbon fibre front mudguard, a headlight characterised by the DRL (Daytime Running Light) and LED indicators. Completing the as-standard equipment is the up & down quickshifter.

Get the latest news and offers straight to your inbox